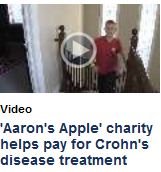 Aaron Maresky knows exactly how lucky he is.

The drugs the 10-year-old needs to treat his Crohn’s disease, which affects his bowels, cost $20,000 a year and are covered by his parents’ insurance.

But other children aren’t so lucky.

The Thornhill boy started a charity called Aaron’s Apple to help other patients pay for the medicine they need to combat the “gums to bums” disease, as well as other auto-immune disorders.

“[Crohn’s] inflames my lower intestine, and it makes my stomach hurt a lot,” Maresky told CityNews.

He lost 30 pounds in the first month when he was diagnosed at seven, his mother Mandy added.

“I thought it was unfair” that other children didn’t have the same access to drugs, Maresky said.