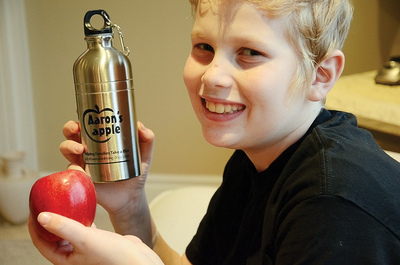 There isn’t much that separates Aaron Maresky from other 10-year-olds in Thornhill. The only notable difference in appearance is he prefers to don the red, white and blue of his beloved Montreal Canadiens over the blue and white of the Toronto Maple Leafs. “They have the most epic team,” he said. “You know what Leafs stands for: losers even after 40 seasons.”

Three years ago it wasn’t as easy for Aaron to joke around. He was holed-up in a hospital bed at SickKids for three months after losing 30 pounds. It was there he was diagnosed with Crohn’s disease. The chronic inflammatory bowel disease forced Aaron onto a steady diet of biological infusions that he will have to take for the foreseeable future and quite likely the rest of his life.

The good news for Aaron was the treatments made him feel a lot better. He was able to gain his weight back and return to Associated Hebrew School.
Upon one of his many returns to SickKids for an infusion something compelled Aaron to reach in his pocket and pullout money that he wanted to donate. “Charity helped me when I was in the hospital and I thought other children needed help, too,” he said. That’s how Aaron’s Apple was conceived.

The charity, set up by Aaron and his parents, Mandy and Neil, helps families pay for the sky-high drug costs it takes to treat auto-immune diseases. Ms Maresky said the family is lucky to be covered by a private insurance plan. OHIP doesn’t cover auto-immune suppressant infusions so a lot of families are left in a lurch, she said.

The cost of one of Aaron’s treatments is just under $4,000. The annual bill would be somewhere in the vicinity of $30,000, she said. Families can apply for assistance from the Trillium Foundation but sometimes the application process can take six months. “We help bridge that gap,” said Ms Maresky. “We’re willing to help anybody who needs our funding with any kind of expense of medical costs. We try not to turn anyone down.”

So far Aaron’s Apple has raised $45,000. It is a registered Canadian charity that is run under the auspices of Chai Lifeline Canada. Ms Maresky said children are recommended to them from SickKids.
But there is continual pressure for Aaron’s Apple to raise more money because children continue to need support. “We try to raise a lot of awareness and try to get as much support as we can and raise as much money as we can,” said Ms Maresky.

The charity is hosting its first annual gala in February and Ms Maresky said she is looking for corporate sponsors.
Aaron said he was happy with how the charity has grown over the year with successful fundraisers. At the latest fundraiser, a spin-o-thon at Spynga Yoga, Aaron’s Apple raised more than $14,000.
Aaron was reluctant to heap accolades on himself for the charity’s accomplishments. He simply said, “I felt it was the right thing to do.’”

He still has is ups and downs. Although he receives infusions regularly, he has bad flare-ups periodically that make life a little more difficult. Aaron has gotten used to the hospital. The first time he was a SickKids he had to be held down to receive the needle for his infusion. Now, he just asks for them to count to three.
In his free time Aaron prefers to read Louis Sachar, watch the Montreal Canadiens and chastise Maple Leaf fans. “You are not a Canadiens fan. Shame on you,” he said.